“They weren’t writing a lot of rock and roll songs for girls in the fifties; probably because I was the only one.” Wanda Jackson at City Winery Atlanta, 1-27-17 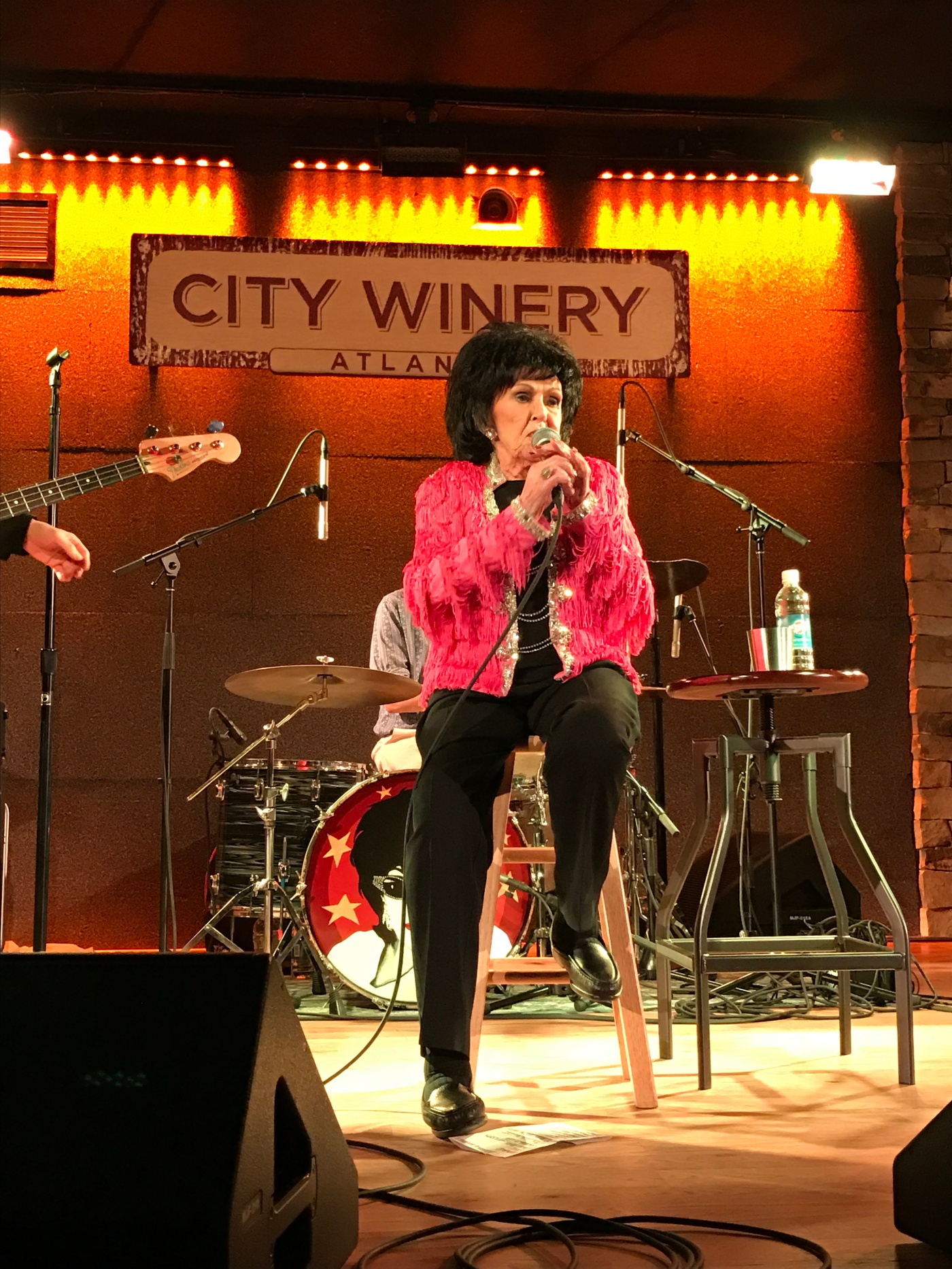 With a sparkle in her eye as bright as the bejeweled buttons on her fringe jacket, Wanda Jackson’s January 27th show at City Winery Atlanta proved that this legendary lady, often hailed as the Queen of Rockabilly, still wears the crown.

For those unfamiliar with Ms. Jackson (who unfortunately did not receive the press she deserved in her 1950s and ’60s youth), below is a video of her playing her self-penned 1958 song “Mean Mean Man,” a rare rock song from a woman’s perspective. As Jackson states “they weren’t writing a lot of rock and roll songs for girls in the ’50s, probably because I was the only one.” Watch her wield her guitar and rock with the best of ’em.  The mainstream music industry of the time did not know what to do with a female singer with such a wild voice and shimmying fringe dresses:

If  Ms. Jackson’s growling voice and raw sex appeal proved “too much” for mid-century America and consequently flew under the radar, she receives her due in the 21st century.  Now considered one of the greats along with Elvis, Buddy Holly, and Jerry Lee Lewis, as well as her few female counterparts like Brenda Lee, Ms. Jackson has gained quite a following.  Her classic songs resurfaced during the rockabilly revival of the 1980s as bands like The Cramps covered them.  More recently, Jack White of the White Stripes produced “The Party Ain’t Over” in 2011 featuring Ms. Jackson covering beloved songs old and new including The Guess Who’s “Shakin’ All Over” and Amy Winehouse’s “You Know I’m No Good” that reached new audiences.  At Atlanta City Winery the packed house and diverse and fervent crowd of Jackson’s fans spoke for her popularity itself.

The stage was set with various instruments including a drum kit featuring Jackson’s glamorous big-haired visage.  Her band, including two guitarists, a bass player, a drummer, and a keyboardist, came out first, playing instrumentals from Ms. Jackson’s 1950s and ’60s heyday including Link Wray’s iconic “Rumble.”Then, as the audience watched with baited breath, the Queen herself stepped onto the stage, escorted by her granddaughter, Jordan, in a hot pink fringed jacket a nod to her figure-hugging fringe dresses of the past.  Without much further ado, Ms. Jackson and her band burst into raucous song.  Below is Jackson’s 1960 version of the classic “Riot in Cell Block # 9.”  So much stage presence!

Born in 1937 in Maud, Oklahoma, she now calls Oklahoma City her home.  As a fellow Oklahoma native, I took an especial affinity to Ms. Jackson when I learned of her origin several years ago.  Discovered at age fifteen  in Oklahoma City, she would go on to tour with a certain “tall, good-looking single man” unlike anyone she knew in Oklahoma.  This gentleman had long hair for his time, wore a yellow sport coat, and drove a pink Cadillac.   He happened to be none other than Elvis Presley, whom Ms. Jackson toured with and dated and who played a pivotal role in her career when he convinced her to play rock and roll instead of pure country.  See her fierce version of Presley’s “Hard-Headed Woman,” which  compared to Presley’s version, sounds utterly ferocious.  Notice her classic sense of humor in the description of “Hard Headed Woman” as a “love song”:

“Funnel of Love,” doubtlessly inspired by the infamous funnel clouds known to touch down on the Oklahoma plains, has a lush minor sound that gives a sensation of gently tumbling and spinning. English soul singer Adele cites the song as a major inspiration, and while Ms. Jackson does not see the connection between the two songs herself, Adele informed her that if she hadn’t heard Jackson’s “Funnel of Love,” she never would have written her hit “Rolling in the Deep”:

The aggressive rock song “Fujiyama Mama,” was a surprising number-one hit in Japan in 1959, even with its references to Hiroshima and Nagasaki, while it failed to chart in America even though as Ms. Jackson states “we won that war.”  No man-or woman for that matter- would want to mess with her after hearing it:

One of the last songs of the night was a cover of Hank Williams’ “I Saw the Light,” an homage to her 1971  calling to born-again Christianity at a time when she felt unhappy and unfulfilled.  While not everyone in the audience may have shared the same religious views, Ms. Jackson had so many clapping along nonetheless, moved by her infectious spirit.

Not only did the concert showcase Ms. Jackson’s perennial talent and wicked sense of humor, it also provided a great in-depth look into her life as she willingly gave a notebook’s worth of biographical information that tied in neatly with each of her songs.  I am heartened to see that Wanda is receiving her credit as the fearless pioneer of the early days of rock, and a female nonetheless.  A Wanda Jackson show is a must-see for music historians, early rock fans, and female musicians alike!

Thank you for reading!

2 thoughts on ““They weren’t writing a lot of rock and roll songs for girls in the fifties; probably because I was the only one.” Wanda Jackson at City Winery Atlanta, 1-27-17”