Wild Women Don’t Get the Blues: Francine Reed and The Shadows at Blind Willie’s 9-23-17

At long last, Honeysuckle Roads made its first trip to Blind Willie’s.  The storied blues club, named after the even more storied Georgia bluesman Blind Willie McTell, has provided a home for lovers of the blues since 1986.  But it feels like it’s been a hoppin’ place for live music since at least the 1920s.

The dark atmosphere and numerous portraits on the walls of renowned blues musicians of the past, including that of the original Blind Willie, reveal the venue as a place rooted in blues history and serious about preserving the American art form.  Yet with the motto “It Ain’t Easy Being Sleazy,” you can bet this is a place where letting your hair down is encouraged. 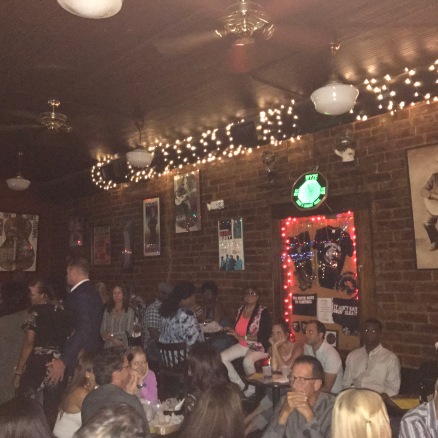 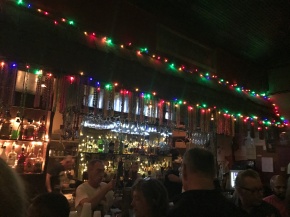 The line to the entrance on the sidewalk outside was long that night.  The small club could only hold so many revelers, so the bouncer allowed those standing in line into Blind Willie’s in between sets.  According to the buzz I’d heard, the act that night was no run-of-the-mill performer.  She was Francine Reed.  Local legend and blueswoman extraordinaire.

A longstanding performer at Blind Willie’s, Reed was born in Chicago and grew up in Phoenix but made Atlanta her home since the 1990s.  Blind Willie’s house band, The Shadows, played with Ms. Reed for nearly twenty years with different lineups.  But Reed’s career extends far beyond Blind Willie’s.  She sang regularly with Lyle Lovett and his Large Band in the 1980s and ’90s, and duetted with other greats including Willie Nelson.

As a solo act, Ms. Reed most definitely held her own and dished out the sass as well as soul.  Backed up by The Shadows (Albey Scholl on harmonica & vocals; Kenny Kilgore on lead, rhythm & slide guitars; Roger Gregory on bass; and Bill Stewart on drums), the show was on fire.  See the following videos for proof:

The first song of the set I saw was Canned Heat’s 1970 “Let’s Work Together.” It really warmed up the crowd:

Getting down and dirty with “I Want You to Love Me”

I think everyone was “feeling good” during this:

A Francine Reed signature song, “Wild Women Don’t Get the Blues,” is a liberated woman’s anthem:

Ms. Reed took us back to her birthplace with “Sweet Home Chicago:”

Life is all about the sacred and the profane.  Both define the experience at Blind Willie’s. The performance rallied the crowd and the vibe among the dancing, rapt audience bordered on the spiritual.  And Francine Reed brought us to blues church.