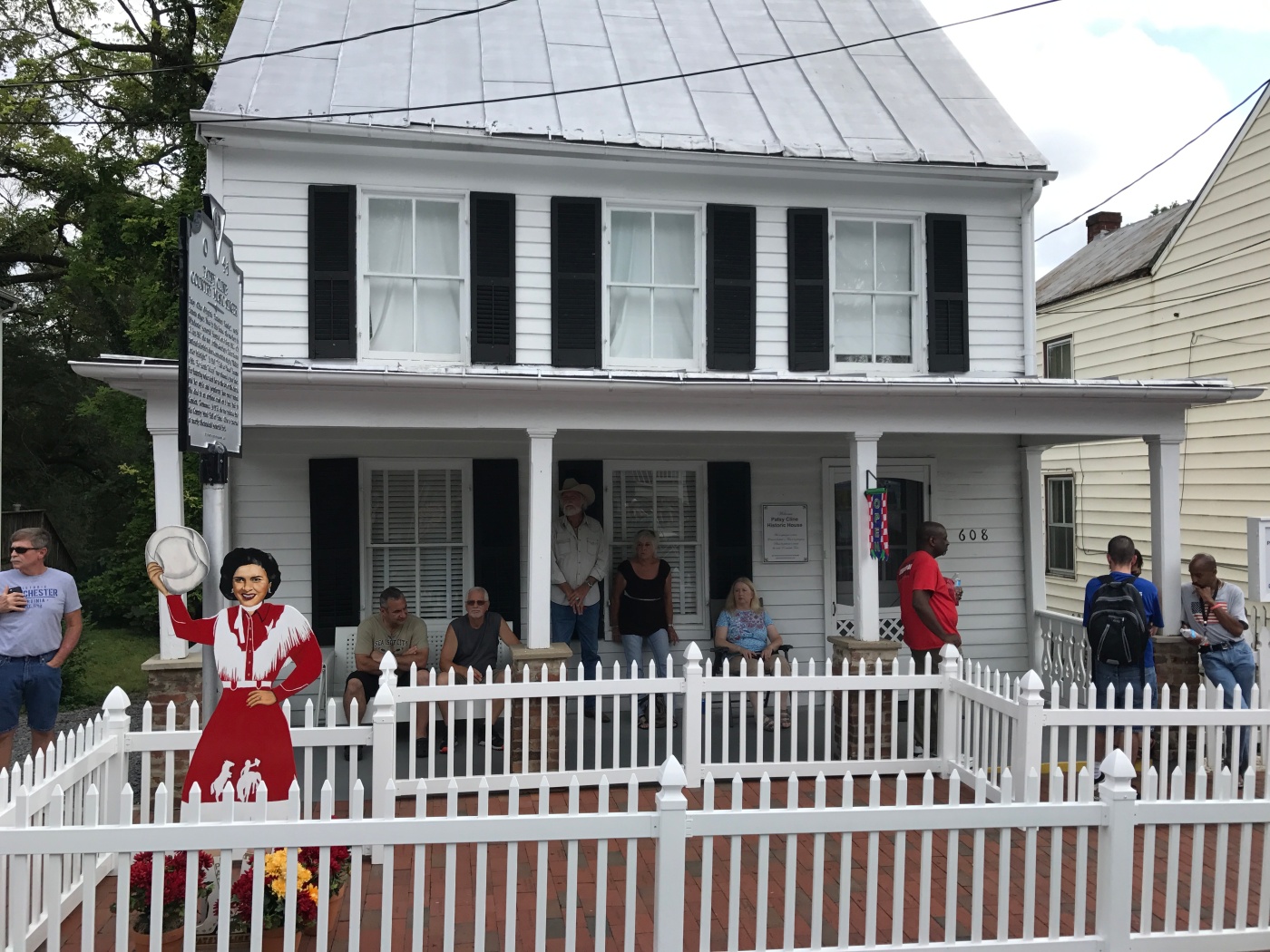 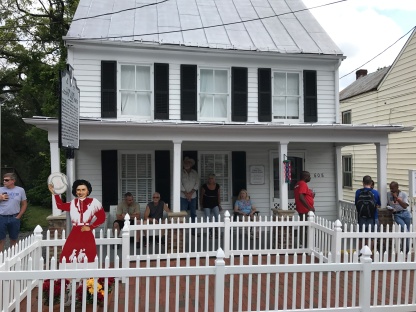 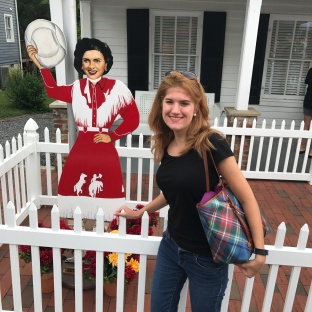 Hosted by the Patsy Cline Historic House, the festivity includes a host of musical acts, a food truck, discounted tours of the house, and even an appearance by Patsy’s daughter, Julie Fudge!

As I parked on a side street and made my way to the house, I heard the strains of melodic music. It was none other than Maria Lynn Price, winner of Patsy Cline singing competitions and singer in the band Another Fine Mess.

In the video below, Maria sings Patsy’s “Sweet Dreams” with Another Fine Mess band member Steve Sandy on bass and guest Eddie Lambert on keys:

And below hear “Lovesick Blues,” sung both by Hank Williams and Patsy Cline.  Can you believe the high note she hit at the end?!

It’s no wonder Maria has been asked to play the block party several times; she really has talent and some of Patsy’s timbre!

In addition to the talented musicians, one of the singular people I met was Sherree Shannon, member of the Patsy Cline Fan Club who traveled all the way from Canada to attend the Block Party. Her mother was a huge Patsy Cline fan, who even befriended Patsy and corresponded with her through ten-page letters.  Sheree was so kind to share the following picture with me of Patsy’s fans who became fun-loving group of friends.  Sheree’s mother appears second from left, and Patsy of course is in the center:

A veteran of Patsy-related events, Sheree is close with Julie Fudge, Patsy’s daughter, and I had the privilege of meeting Julie as well! She was so gracious and friendly, and treated me and other visitors like old friends in the neighborhood. It was a treat to hear her stories of her grandmother, Patsy’s mother Hilda, and how she lived at three different houses on the same street, most of which were originally historic log cabins: 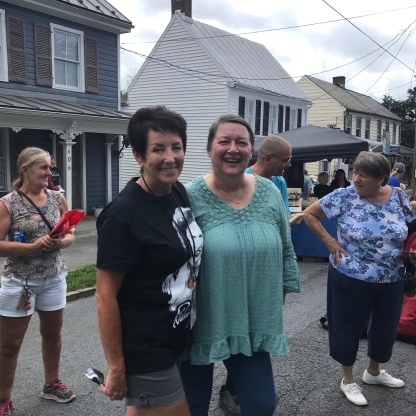 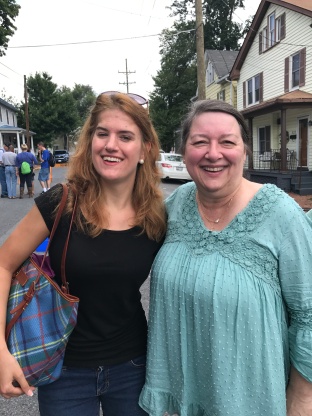 Yours Truly and Julie Fudge 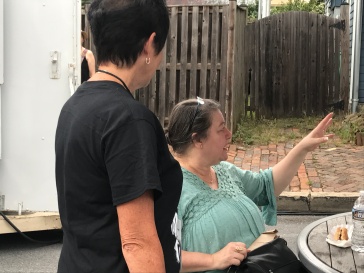 Julie Fudge discussing the stories of the houses in the neighborhood 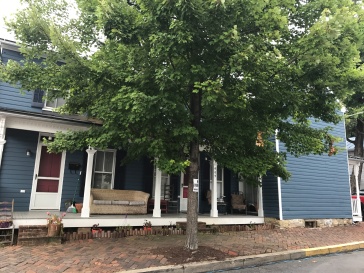 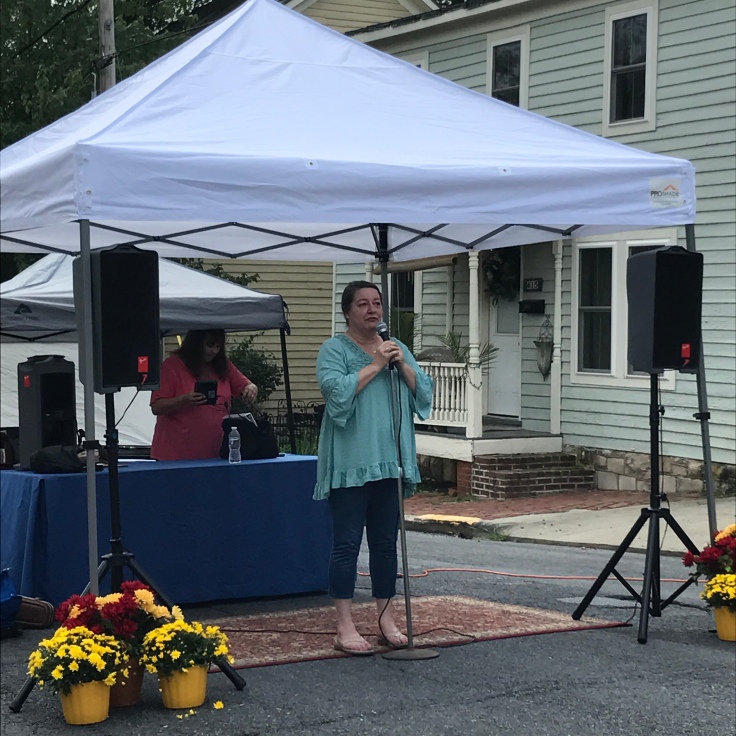 About halfway through the event, Julie gave a speech.  She would give another moving speech the next day when she visited her mother’s grave with the Patsy Cline fan club.  It was so nice to meet her and hear her interesting and often funny family recollections, including a few surprisingly ribald stories of male family members making fun of the Dick last name (Patsy’s second husband, Julie’s father, was named Charlie Dick.  According to Julie, you have to own it).  You could say the atmosphere was a mixture of the sacred and profane.

While the celebration was full of serious reverence for Patsy, her great music, and her tragic early death, it also revealed her love of neighborhood and her and her family’s sense of humor.  Patsy was very down-to-earth and loved to socialize. According to Julie, if Patsy were alive, she certainly would have been laughing it up and chatting among the revelers as if they were neighbors in the old-fashioned sense of the word.

Interspersed throughout the day, longtime Patsy Cline singer Liz Ruffner took the mic.  Liz’s twenty-two year resumé includes performances at Andrews Air Force Base as well as fan club tours, and Julie touted her as sounding almost indistinguishable from a Patsy record.  Liz recalled her first foray into public singing at the karaoke bar Rainbow Diner, where she was eventually persuaded to sing Patsy’s songs.

Here she is giving a spirited rendition of “Love, Me Love Me Honey Do:”

In the following video, Liz sings “True Love” which is a touching song for her because it reminded her of her parents’ own romance and the happy home they had with lilac bushes outside the window.  A story right out of a classic romantic film with music to match:

The next performance was by Fred Pollard, who is both a musician and a real-estate agent in Winchester.  In between his acoustic renderings of Patsy Cline tunes, He regaled us with his vast knowledge of the history of her career and famous songs, including the story of the song “Crazy,” penned by Willie Nelson and a hit for Patsy in 1962:

And below is “Rose of San Antone,” a song I felt particularly fit Pollard’s pared-down cowboy style:

Last but not least were The Valley Boys.  Based on the name, I expected them to be a bluegrass act.  Boy was I surprised!  The two teens, comprised of fifteen-year-old Daniel Walker on vocals and electric guitar, and fourteen-year-old Garrett Custer on drums, played high-energy mid-century rock’n’roll hits as well as cool rhythm and blues and their own lovely ballad. The first song I heard by them was “Twenty Flight Rock” by Eddie Cochran, and they also gave a great performance of “That’s Alright (Mama)” and “Blue Suede Shoes.”  I just adore their version of “Blue Monday,” written by Dave Bartholomew and a 1956 hit for Fats Domino:

Next is an original tune Walker wrote about the Commonwealth, titled “Virginia is Nice.” It’s an easy-listening song that reminds me of James Taylor’s style for a contemporary audience.  I can easily imagine it playing on the radio:

And the last song was just the rockin’est!  The boys’ rip-roaring version of Little Richard’s 1957 “Ready Teddy.”  If you liked the Valley Boys, I hope you spread the word.  I have the feeling they could be two of Winchester’s rising stars.

What a fun day filled with music, history, and great people.  I encourage you to plan a trip to the Patsy Cline Block Party next year, and celebrate Patsy Cline among a diverse crowd with Patsy’s family in her own hometown neighborhood.  You’ll feel right at home!

One thought on “Honeysuckle Roads Returns to 608 Kent Street for the Patsy Cline Birthday Block Party!”